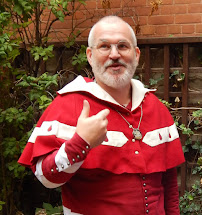 Colyne Stewart (he/him) is an apprentice of Duchess Adrielle Kerrec, OP, OL and a squire to Duke Nigel MacFarlane, KSCA. He is also a member of the Ealdomere College of Heralds, the Bardic College of Ealdormere, the Ealdormere Scribal College, the Head of the Games Guild of Ealdormere, and the Precentor of the Scriptorium.